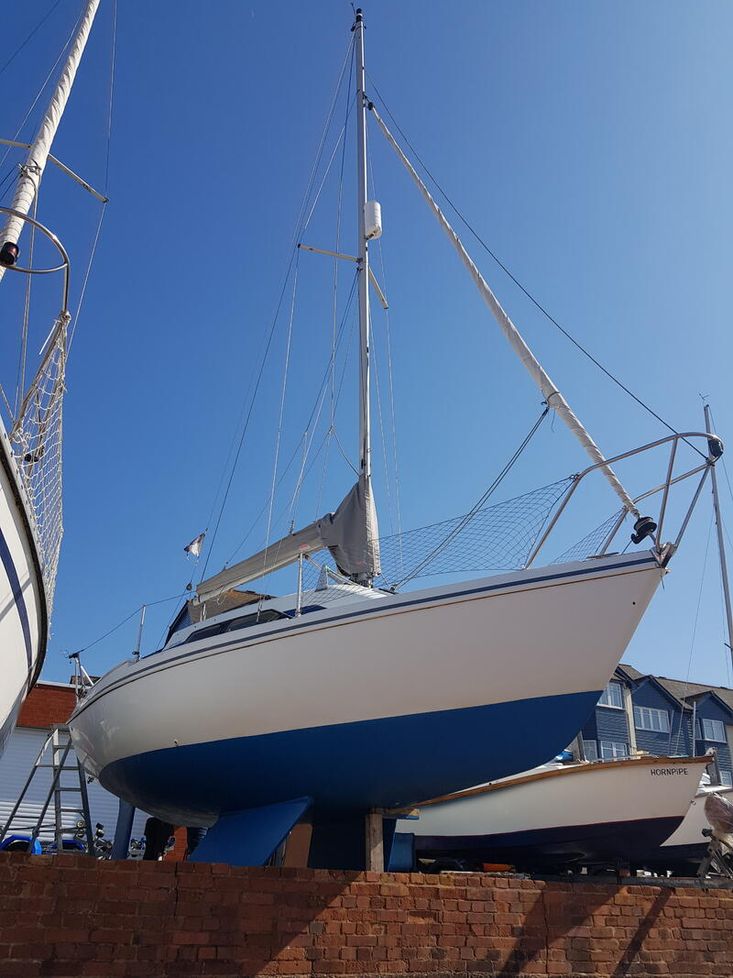 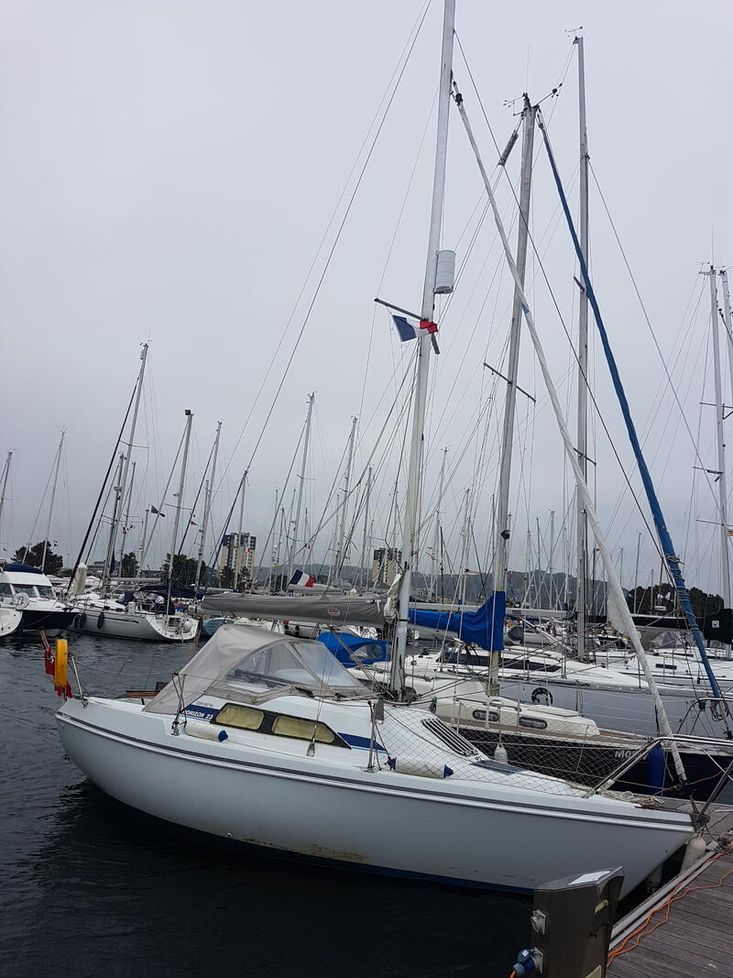 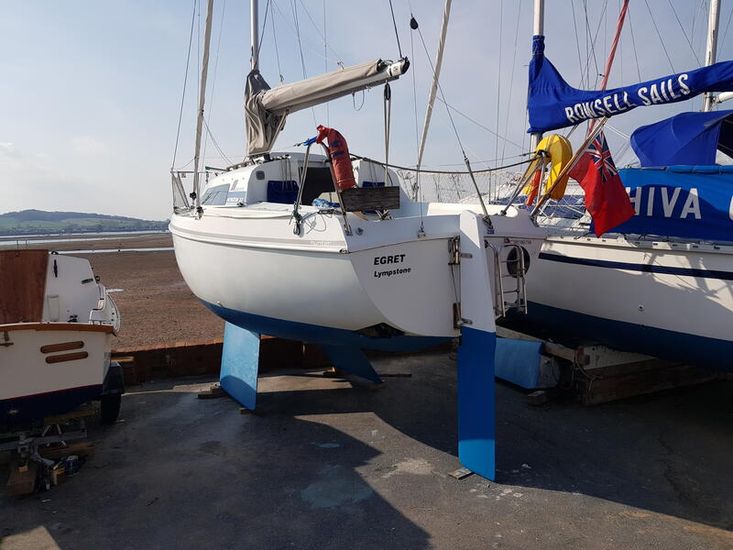 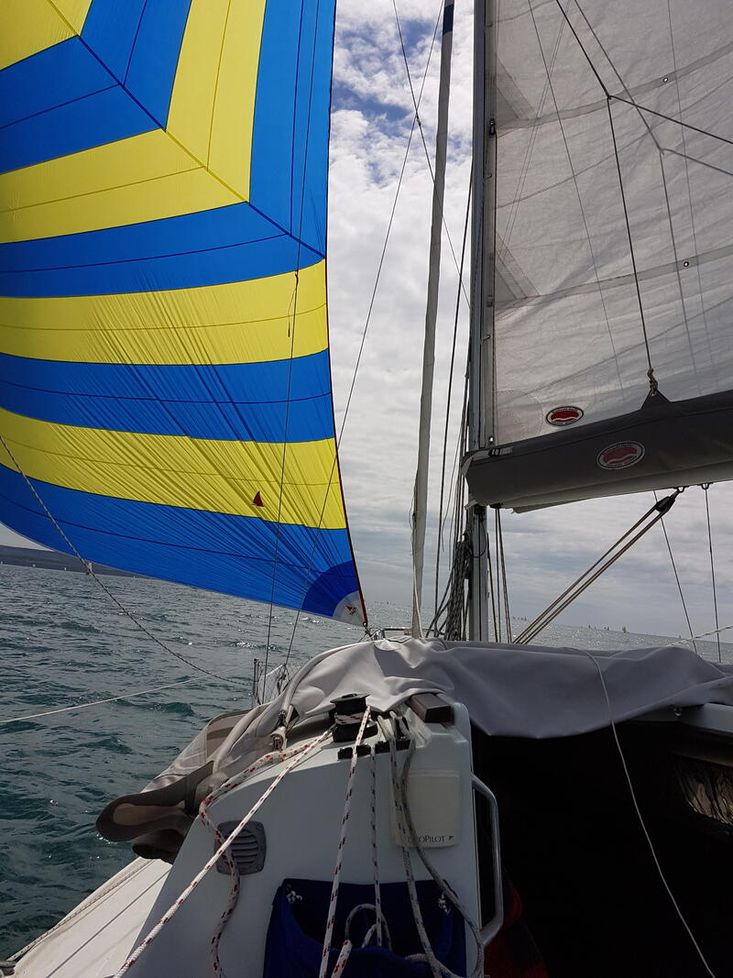 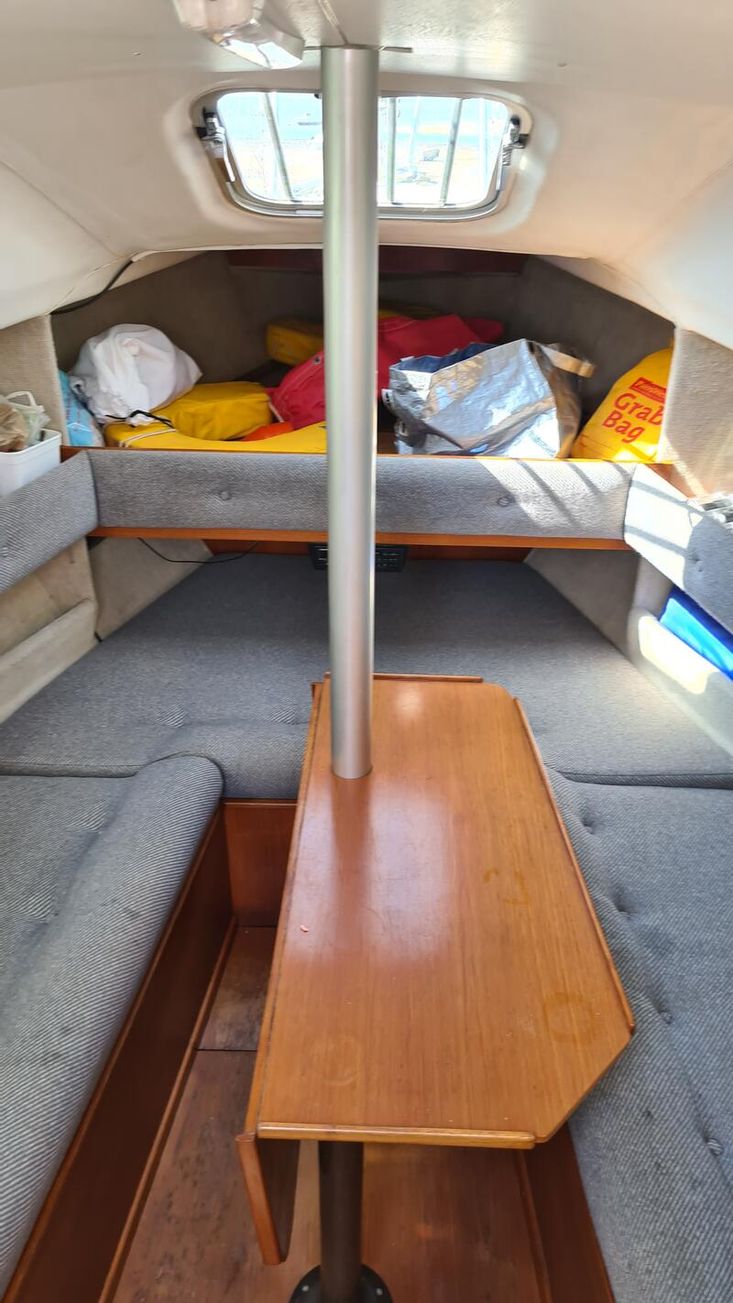 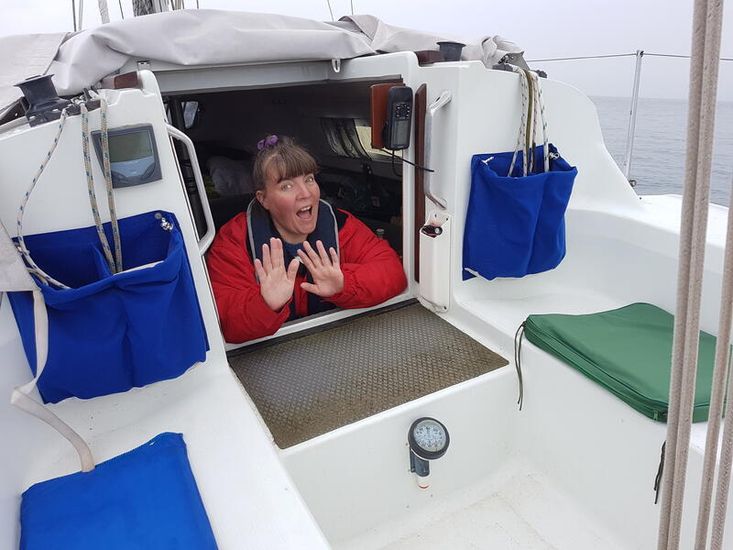 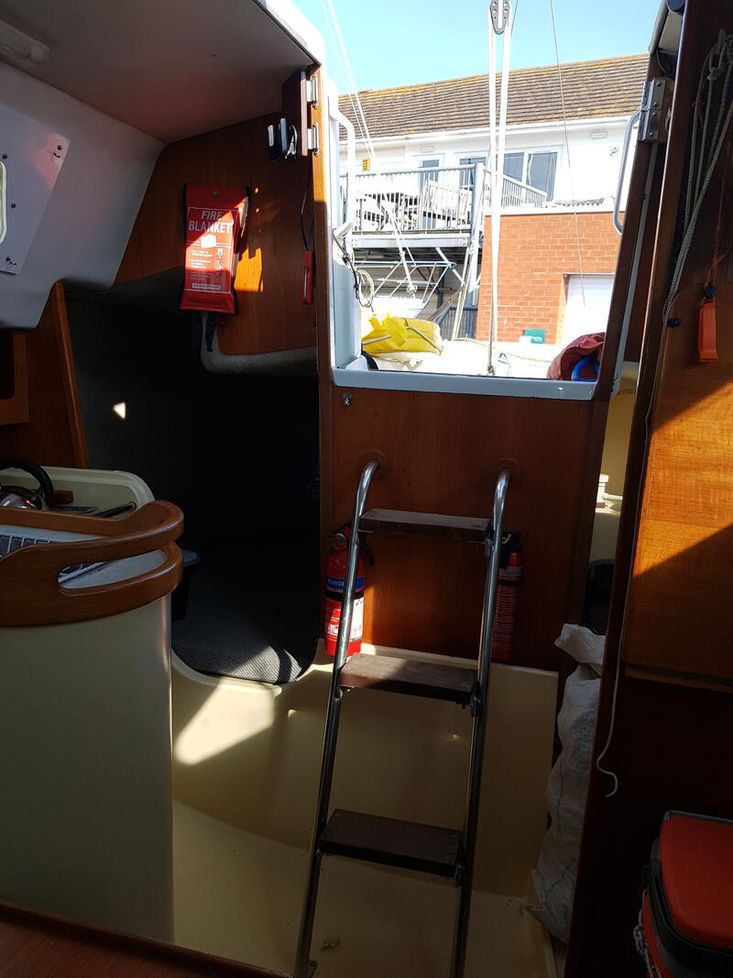 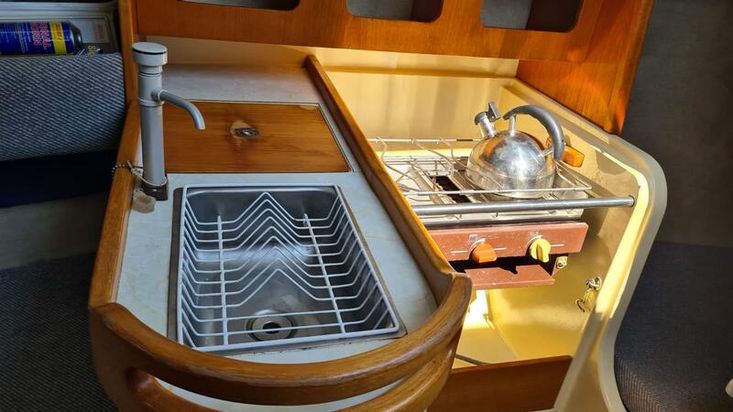 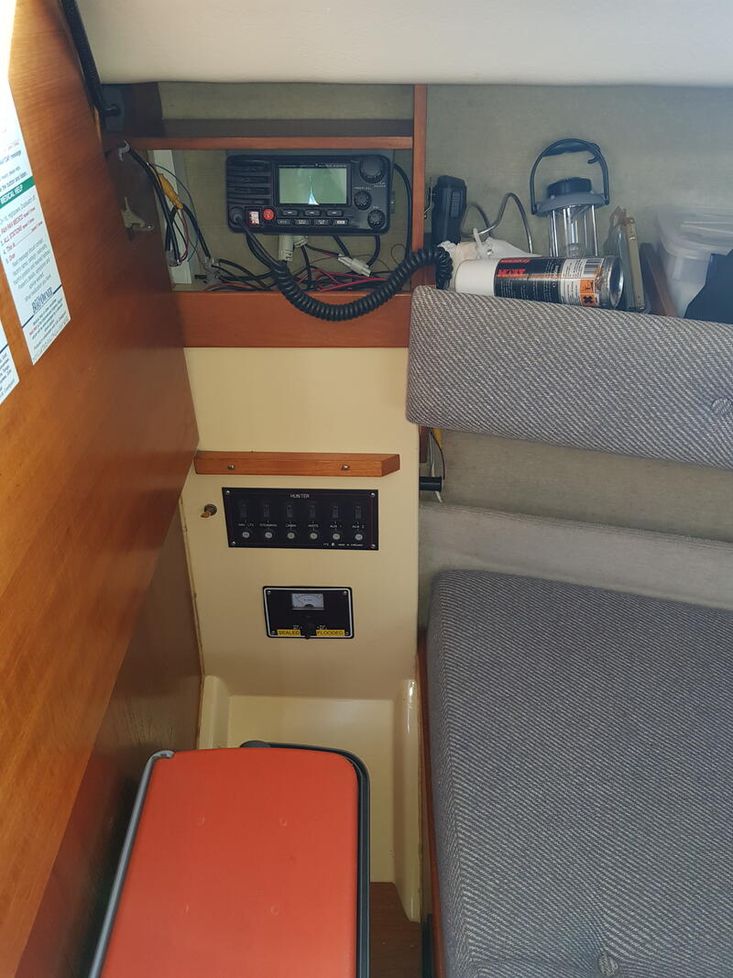 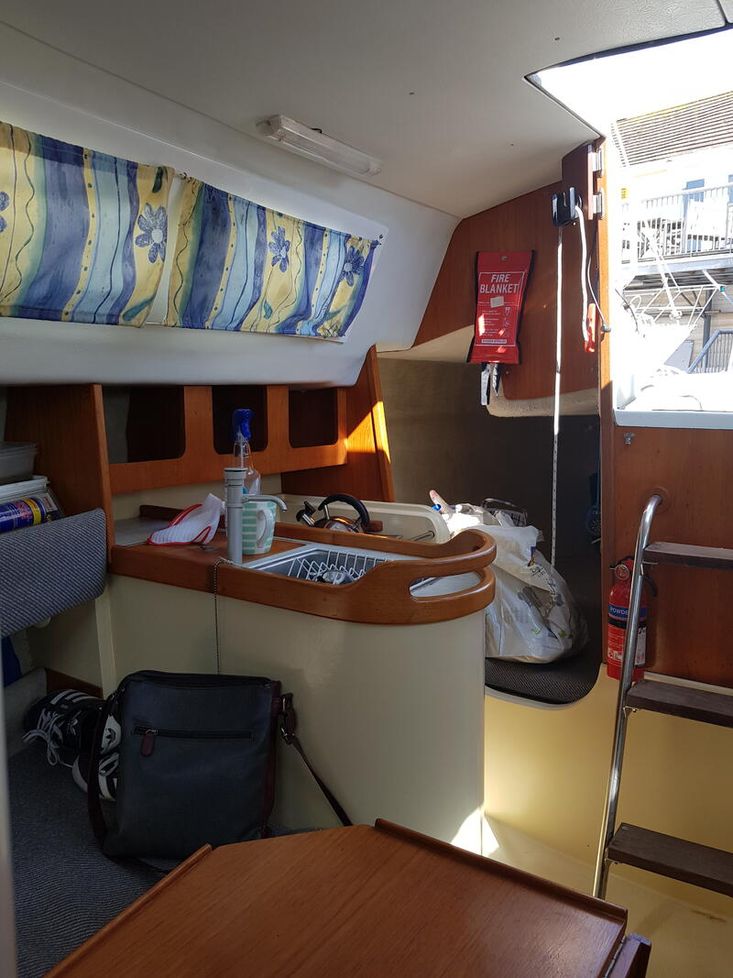 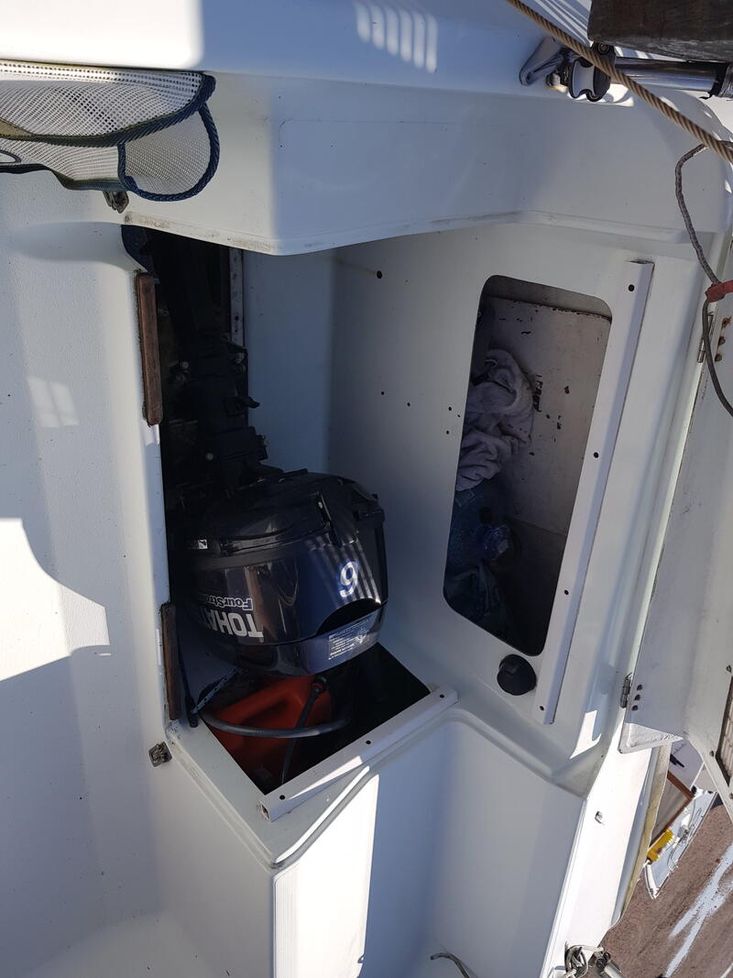 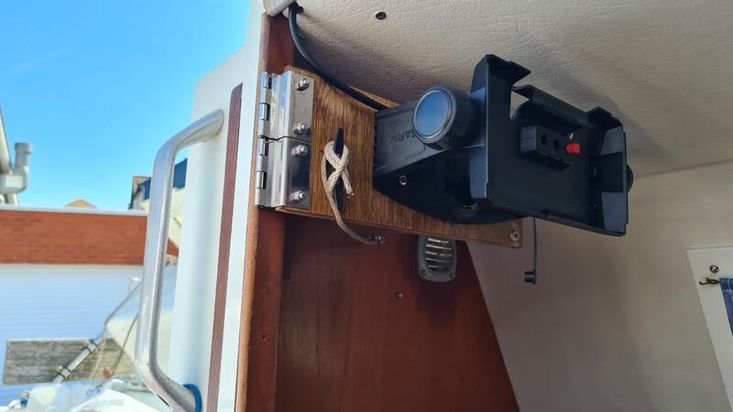 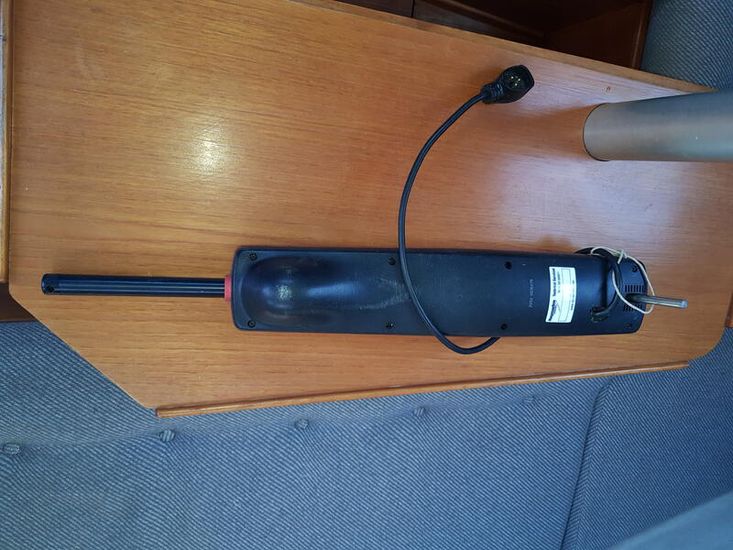 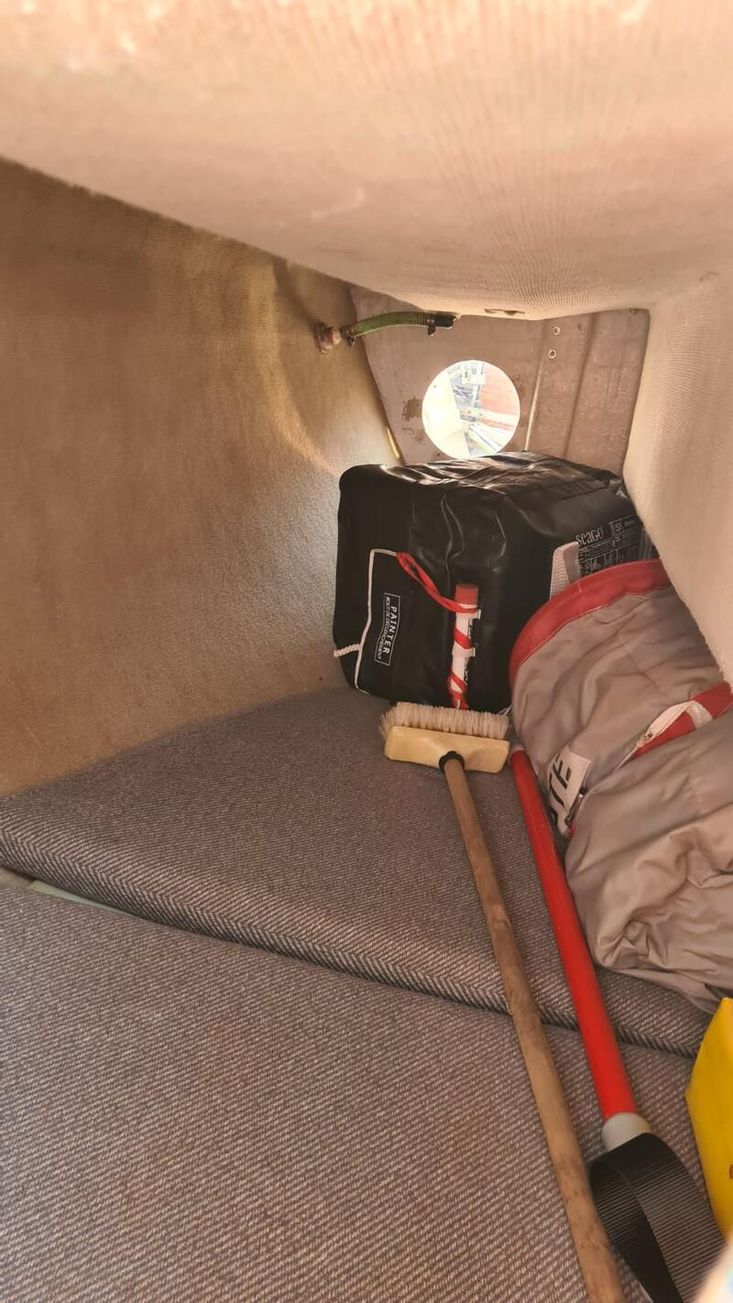 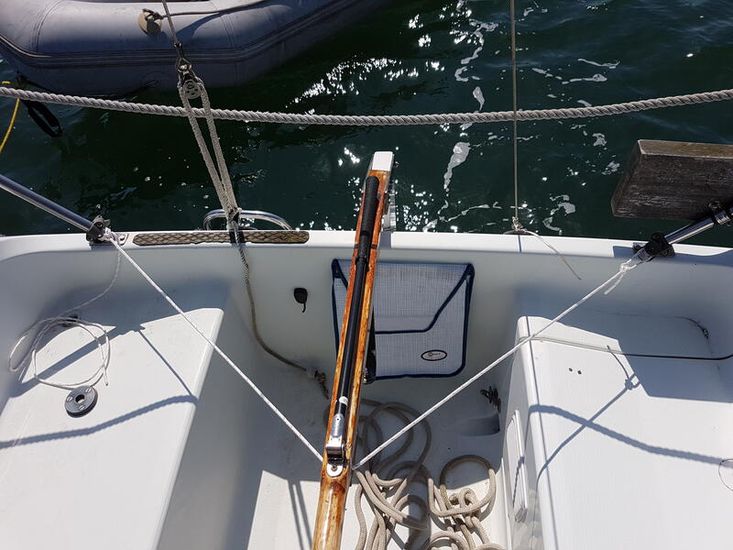 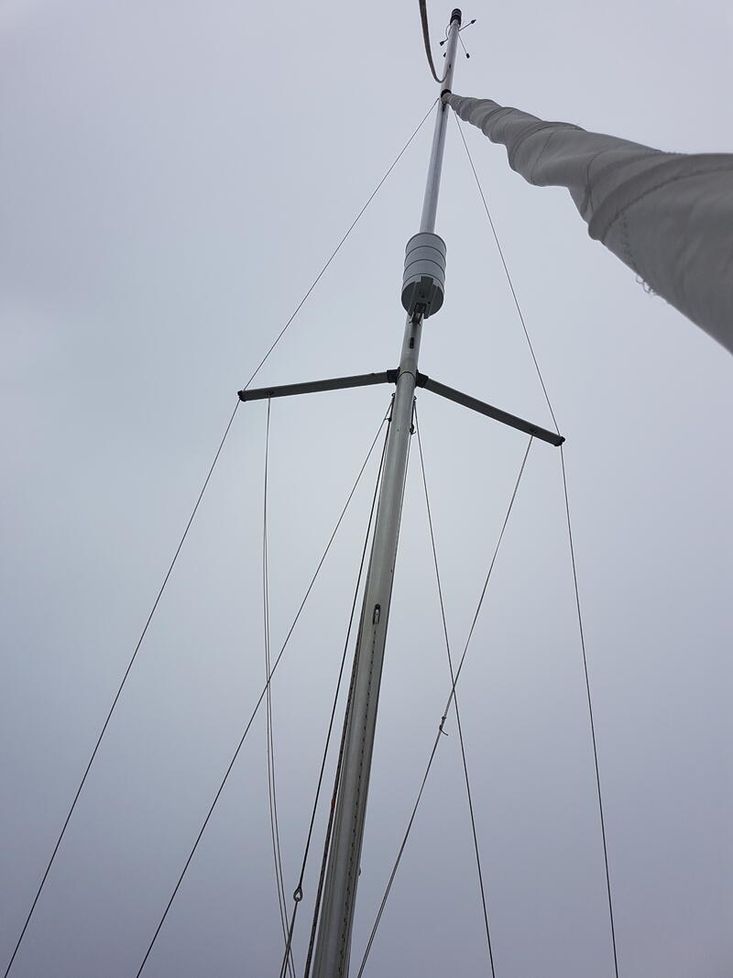 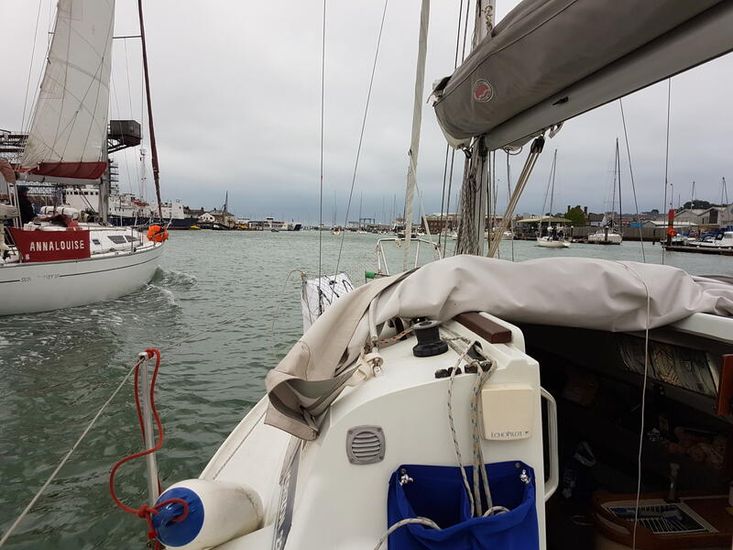 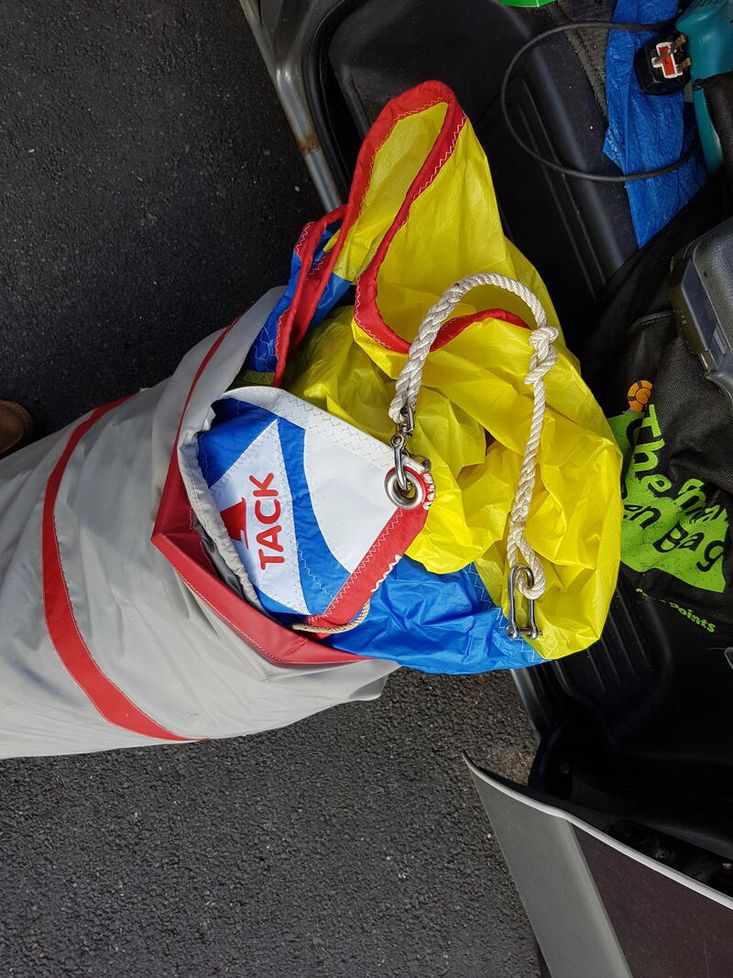 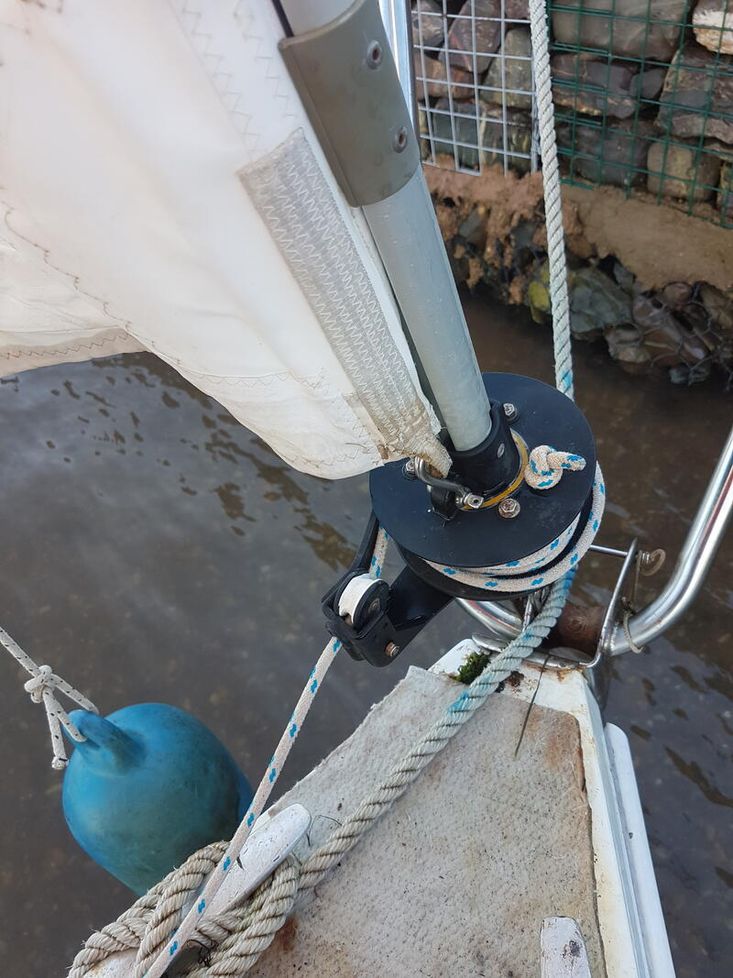 EGRET is a Bilge Keel Hunter Horizon 23, built in 1991. We bought her in 2016 from her original owner who had owned her from new and had her moored at Lympstone, so she has always been kept on the Exe.
She is a reluctant sale, but we are not using her as often as we would like due to trying to refurbish 2 x houses, holding down full time jobs, and having the added distractions of owning 2 x sailing dinghies, 2 x kayaks, a windsurfer and a developing fascination with kitesurfing…..you get the picture !.
We have used EGRET for extended touring along the south coast, day trips to our favourite local swimming spot, where we anchor off the shore and swim off the boat, with a picnic on board or bbq on the beach. However, she is a tough sea boat and in our ownership has taken part in the IoW Round the Island Race,as well as taking us to Cherbourg, France and back with no drama.
She is an ideal boat for the EXE, being of relatively shallow draft, so with a wider sailing window than deeper draft boats, especially on Spring tides, to get safely in and out with enough water under the keel.
EGRET comes with a 100% reliable, barely run in 2016 Tohatsu 6hp 4 Stroke outboard engine (fitted with Sail Prop from new) and a 2018 AIS / GPS enabled VHF radio (which we linked to our chartplotter so AIS targets appear on it in real time – essential when crossing shipping lanes). The VHF radio and Chartplotter were bought specifically because they integrate well together – the Chartplotter may be available under separate negotiation.
The Jib is self tacking and all lines run back to the cockpit for ease of single handed sailing when required. The mainsail benefits from lazy jacks attached to the sail cover. A cruising chute is included within the sale.
An Echomax EM180 was attached to the mast in 2018, in preparation for our trip to France. There are 2 x batteries on board, trickle charged by a 10W solar panel (2018) via a SunSaver Duo split charge device.
EGRET has a chemical toilet installed, which is a godsend when berthed in a marina where flushing of sea toilets is prohibited, and also means no worries about failing sea cocks !. However, a sea toilet can be installed at relatively little cost if required. The fresh water tank is of the flexible type and was replaced in 2018.
Condition wise, EGRET is in very good condition, with a watertight hull, albeit with some shallow marks where the mooring chain has scraped along. Were we keeping the boat we would probably fill and sand these back ourselves. I noticed the other day that the sail cover ‘boot’ is ripped, so im going to get that replaced regardless.
The boat is antifouled and ready for lift in at Exe Sailing Club on 27th April, where she will be put back on her swing mooring in 01 area.
PLEASE CONTACT ME IF INTERESTED AND FOR DETAILED FURTHER INFO AND PHOTO’S.

Very reliable and powerful engine - has never let us down.

Boats for sale
by continent

Boats for sale
by country